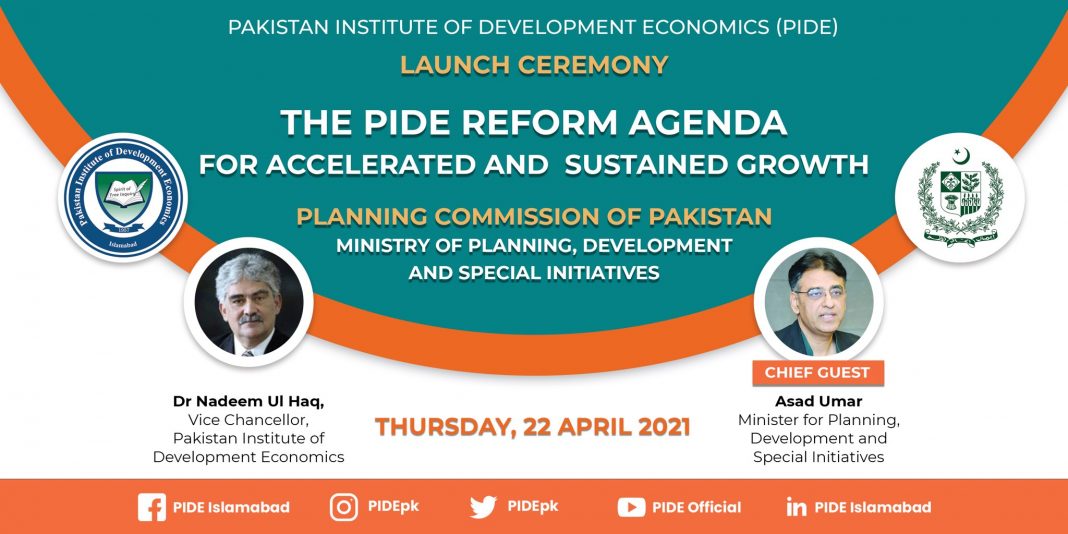 The PIDE Reform Agenda for Accelerated and Sustained growth was launched today at the Planning Commission of Pakistan. Dr. Nadeem Ul Haque Vice-Chancellor, PIDE presented the Agenda at the launch ceremony attended by many well-known economists, development practitioners, representatives from universities, development partners, and several ministries. Minister of Planning Development and Special Initiatives, Mr. Asad Umar was the chief guest at the launch event.

According to PIDE the task of preparing the Reform Agenda began with asking a central question; Can Pakistan experience accelerated and sustained economic growth and If yes, how? To find an answer VC PIDE constituted a PIDE Growth Commission. The Commission comprised renowned local economists and development practitioners from all over the country. The commission also had an adequate representation of the female professionals. The commission was supported by a secretariat at PIDE, consisting of 18 researchers led by Dr. Nadeem Ul Haque, Vice-Chancellor PIDE.

The first step involved developing a slide deck that depicted the structural issues that constrain growth in Pakistan and the measures required to alleviate these constraints. This slide deck was discussed and modified extensively in several meetings of the PIDE Growth Commission. Next, the secretariat at PIDE drafted the outline and initiated writing the Reform Agenda based on the outline. The drafts of sections and chapters moved back and forth between the PIDE staff and the Vice-Chancellor till the first draft of the complete Reform Agenda stood completed. At this stage, PIDE’s research staff interacted individually with commission members and other practitioners in government and the private sector and incorporated their suggestions.

The Agenda takes the view that the development model that Pakistan has been using since the sixties focuses primarily on investment in hardware led by infrastructure. This model, argues the agenda, developed by Dr. Mahbub ul Haq and the then Harvard Advisory group in the ‘60s was correct for those times when the country needed investment infrastructure. However, with change dynamics, now the model needs to undergo a paradigm shift – the country now needs to shift its focus from investment in hardware to investment in the software of the society. This software is the quality human capital, innovation, R & D, and most importantly the laws, rules, and processes that further economic activity.

The Reform Agenda points out that the present laws, rules, and processes constrain the generation of ideas and carrying out overall economic activity.  The agenda citing several frictions in carrying out entrepreneurial activity calls for a revamp of the laws and processes that hamper economic activity. The examples of frictions include; 09 procedures are required to get a permit which cost around 9 percent of the construction value, land developers need 22 NOCs from different agencies to proceed with land development, 45 steps are required to lay an optic fiber for internet connectivity and on average, a firm spends 577 hours and wades through 47 procedures to pay the several taxes that it is required to pay. The reform agenda argues that amending laws and processes to significantly reduce these frictions will enormously boost growth by increasing productivity and hence investment – the two key drivers of growth.

Therefore, argues the Agenda, to begin the journey on a high growth trajectory requires a well-functioning state – entire public service including Civil Service, Judiciary, regulatory bodies, and local governments, etc will have to be reformed to deliver.

The agenda stresses that the cities that major economic activity happens in cities that are dense, walkable, and mixed-use. The agenda recommends rethinking our cities to serve as an engine of economic growth.

The agenda stresses that to increases the competitiveness of our goods and services the energy rates must be brought down significantly. In this regard, the agenda recommends several measures to clear the mess that the energy sector faces. These include; decentralization of the sector, making the regulatory authorities like Nepra and Ogra independent enough to take their decisions. The agenda also recommends sufficiently enhancing the capacity of these regulatory authorities by housing these with professionals.

The reform agenda also identifies policy, regulatory, and procedural constraints that inhibit openness to external trade and suggests measures required to increase the degree of openness.

Recognizing that technology and artificial intelligence are disrupting almost every field, the agenda argues for state readiness to embrace technology. Internet access is recognized as a key element of such readiness.  The agenda recommends; releasing spectrum, developing a plan to facilitate laying down connectivity fiber, revisiting internet taxation, and exploring subsidizing internet access to students and marginalized segments.

Shares of Peloton [NASDAQ: PTON] is Crashing Today. Here’s Why

Shares of Peloton Interactive, Inc. crashed 13.13% at the time of writing on Wednesday. The weak performance of the firm came after the...
Read more
Featured

Check out the Top Three Cryptocurrency of 2021

Cryptocurrency adoption has seen a huge surge as more and more people are turning their focus towards it. But the main concern for the...
Read more
Featured

Mogo Inc. disclosed that it has decided to invest 5% of the value of its cash and investment portfolio in cryptocurrencies. The firm...
Read more
Featured

Ethereum has marked the history after it set new records by hitting $3,000 on Monday. Ether, the token negotiated on the Ethereum blockchain, went...
Read more
Business

Why Protalix Stock is Crashing Today?

Protalix BioTherapeutics, Inc. stock has plunged 39.66% during the trading session of Wednesday. The negative performance of the company indicated the negative reaction...
Read more
Business

The crypto trading services of Robinhood have been stopped due to the major outage. Trading app Robinhood faced an outage late Thursday in the...
Read more
Business

Shares of Coinbase Global, Inc. skyrocketed nearly 11% during the pre-market trading session of Thursday. The shares of the firm have seen a...
Read more